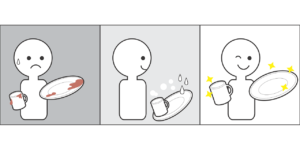 The average adult spends two hours and 11 minutes every day feeling stressed – and more than half of them turn to cleaning to unwind, according to a new survey.

Of 2,000 adults polled by OnePoll.com for household cleaning products supplier Kärcher, six in ten respondents claimed that having a clean and tidy house instantly makes them feel calmer and less stressed, with relaxation kicking in after just 13 minutes of tidying.

More than three in 10 Brits clean as soon as they get home, with 34% even admitting to cleaning things which don’t need it just because they were feeling stressed.

Jack Sweeney from Kärcher UK said: ‘’Our lives are becoming more stressful than ever before, so it’s important to take some time to relax and calm down, particularly after a long day. While reading and listening to music are well-known stress relievers, it seems the old adage of ‘tidy home, tidy mind’, also rings true. Not only does cleaning your home leave you feeling satisfied and houseproud, but being able to sit down in a tidy room is often relaxing in itself.”

Washing up was found to be the most common chore to do when stressed, followed by vacuuming and doing the laundry.

Jack added: “The research shows that the act of cleaning your home is adopted by many Brits as an effective stress management technique. At Kärcher, we strive to deliver products that make this process even more rewarding.”

Top 10 chores to do when feeling stressed:

Wiping down the kitchen surfaces

Washing up is the most common chore to do when stressed