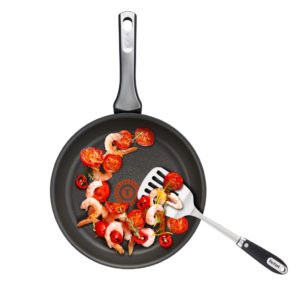 We may consider ourselves to be a nation of foodies but it’s another story in the kitchen, where more than half of people (56%) struggle to get the basics right, according to new research by Tefal.

In a survey of 2,014 UK adults conducted by Opinium on behalf of the housewares brand between April 20 and April 24, a stir-fry topped the list of dishes we’re most likely to overcook (86%) followed by bacon (85%) and spaghetti bolognese (81%).

When it comes to undercooking foods, chips took the number spot on the list (49%), followed by rice (44%) and Yorkshire pudding (42%).

One of the biggest reasons cited for kitchen incidents was our desire to go it alone. More than a quarter (26%) of Brits ignore cooking instructions, guessing the cooking time and temperature – while a quarter (25%) admit to using their hand to test the heat of a pan, which should reach 180°C for optimum cooking results.

These foodie failings mean that many of us (47%) cook the same ‘fail-safe’ dishes in rotation, while a further 37% say that not getting a dish right first time puts them off trying to cook it again.

Cooks aged between 18 and 34 feel they have the most to prove; 85% say they enjoy cooking and trying new things – but almost half (46%) admit to serving up raw or burnt food to friends and family, with 52% blaming a lack of time.

Across the UK, those in the north-east (44%) and London (43%) are more than three times as likely as residents of Northern Ireland (12%) to guess cooking times and temperatures without researching them. And people in Wales are almost four times as likely as those in the north-east to be inspired by foodies they see on social media (19% versus 5%).

The research was commissioned by Tefal to mark the 18th birthday of its Thermo-Spot red dot feature: a heat indicator which goes red when your pan has reached the optimum temperature.

Cooking styles and influences have evolved greatly since the first Thermo-Spot pans went on sale in spring 2000, with TV cookery shows (34%), access to exotic foods (21%) and the rise of kitchen gadgets (15%) such as spiralizers emerging as the top three sources of kitchen encouragement.

Groupe SEB marketing manager of housewares Stefan Kaczmarczyk said: “There’s never been more inspiration for home cooks before, but these findings reveal that many of us still struggle with the staples and could benefit from learning correct cooking times and temperatures for kitchen confidence.

“The good news, though, is that with a Tefal Thermo-Spot pan, there’s no need for guesswork as the pan will tell you when to add food through its iconic red dot, which guarantees a perfect cooking temperature every time.”

Top 10 foods or dishes people struggle to cook from scratch:

Top 10 foods or dishes people are prone to overcooking:

Top 10 foods or dishes people are prone to undercooking:

Top 10 sources of kitchen inspiration since 2000: