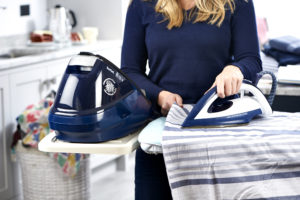 Following a successful marketing campaign in March/April last year, Tefal is once again launching a multi-level digital media campaign to ‘Join the Fight against Limescale’ which will include both Facebook and YouTube.

The campaign will run for four weeks throughout April and will be underpinned with a comprehensive range of specially designed in-store POSM [point of sale material].

Andre Silva, marketing manager linen care of Groupe SEB UK, said: “By using patented Tefal anti-scale technology, limescale build-up is targeted and eliminated. That’s the message this campaign will be blasting out to fully educate consumers on the need to fight limescale and keep their steam irons and high-pressure steam generators working in tip top condition.

According to Tefal, half of homes in the UK have hard water. Over time, limescale builds up inside steam irons or generators, which leads to less steam being generated to remove creases and shortens the life of the product.

Tefal said its ‘ultimate weapon in this fight’ is its Tefal Scale Collector which reduces limescale build-up and blockages in the steam chamber. It claims to be the only brand to offer a removable collector and the first to offer this solution on both steam irons and generators.

The brand said: ‘With a deeper-than-standard capacity, Tefal’s Scale Collector for irons collects scale particles directly from the soleplate in an easy-to-remove drawer, preventing blockages in the soleplate. The Scale Collector for high pressure steam generators is a unique twist-in ‘spoon’ to collect up to 10 times more scale particles directly from the boiler.

Both solutions are quick to empty for hassle-free maintenance: users simply pull out the collector to discard the particles, in turn prolonging the product’s performance and lifespan.’