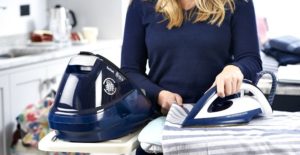 Tefal is mounting a major digital media campaign to educate consumers on the need to protect their steam irons and high pressure steam generators against limescale build-up.

Running from March 14 for six weeks, Tefal will be blasting out its message using multi-level digital media platforms, For example, Facebook will be used to drive traffic volume to www.Tefal.co.uk with 10- and 30-second video views, and two 30-second videos will run against core targeted audiences on You Tube. An anti-scale focused email will be sent via this new campaign platform to opted-in data and Search Engine Advertising, running all year, will peak in the campaign period.

There will also be a dedicated Anti-Scale landing page built specifically for the campaign, which will bring together detailed product information and ‘where to buy’ links.

To aid retailers, all Tefal steam irons and high pressure steam generators in its Anti-Scale range will have a promotional discount applied, and POS merchandising support will be available to maximise sales at point-of-purchase.

Groupe SEB UK marketing manager for linen care Caroline Ross said: “Half of homes in the UK have hard water. Over time, limescale will build up inside your steam iron or generator. This leads to less steam generated to remove creases and shortens the life of the product.

“By using our patented anti-scale technology, limescale build-up is targeted and eliminated. Our weapon in the fight against limescale is the Tefal Scale Collector. It reduces limescale build-up and blockages in the steam chamber to ensure long lasting steam performance for easy crease removal.”

Caroline claimed: “Tefal is the only brand to offer a removable collector and the first to offer this solution on both steam irons and generators.

The Scale Collector for irons collects scale particles directly from the sole plate in an easy-to-remove drawer, preventing blockages in the sole plate. The Scale Collector for high pressure steam generators is a unique twist-in ‘spoon’ to collect up to 10 times more scale particles directly from the boiler.

“Both solutions are quick to empty for hassle-free maintenance: users simply pull out the collector to discard the particles, in turn prolonging the product’s performance and lifespan.