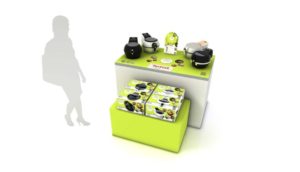 Tefal has launched a marketing campaign to promote its ActiFry Low-Oil Fryers.

The company said: ‘Variety and versatility aren’t words you typically associate with air fryers. But the Tefal ActiFry is different. Its patented 360° paddle even stirs the food for you, opening up a world of exciting cuisine options that other fryers can’t. So you need never eat the same meal twice.’

Running until December 16, the digital media push will comprise seven product feature films shot from a rotating camera, simulating the motion of the ActiFry paddle and hence 360° cooking. The films/videos can be watched on YouTube, Facebook and the Tefal website www.tefal.co.uk .

The campaign will be underpinned with a range of specially designed in-store point of sale material including bespoke packaging, on product POSM including wobblers, interactive display cards and leaflets.

Caroline Ross, marketing manager of Groupe SEB, said: “71% of home chefs get a kick out of trying new recipes, with 73% trying to eat healthily but not at the expense of a delicious dish. And 68% are willing to make a meal from scratch…if only they could find the time. The answer is the Tefal ActiFry – and that’s the message we will be communicating out loud and clear.”

Share
Previous A star is born in the Horwood constellation: a rip-roaring new website
Next Hobbycraft predicts craft trends for 2019