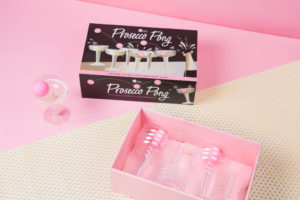 Following an application for an interim injunction to the High Court, B&M Bargains agreed to remove the product from sale, pay Talking Tables its legal costs and substantial damages.

Acting on behalf of Talking Tables, Kelly Hudson of ACID legal affiliate McDaniel & Co said: “We were successful in securing the removal of some products from the market and in other instances, we were able to force the packaging of competitors’ products to be changed.

“The most worrying imitation, however, was that ‘Prosecco Shot Pong’ was being offered for sale by B&M Bargains, whose reputation as a discount retailer had the potential to cause real harm – both to Talking Tables’ sales and, just as importantly, to their brand and reputation.”

ACID commented: “It seems a travesty that Talking Tables had to apply for an interim injunction before B&M Bargains would agree to settle and pay substantial damages. Discount retailing should stick to selling generic products and not stray into infringing the IP (intellectual property) rights of design-led companies such as Talking Tables. Do they really want a reputation as imitators?

“Talking Tables has an absolute zero tolerance of emerging lookalikes and has shown that they take immediate and decisive action. It worked very closely with McDaniel & Co and worked out a proactive IP strategy to take quick, effective action – resulting in an extremely positive outcome, which has secured both the sales profile of one of their strongest sellers and their own reputation for designing high quality, classy products.”

ACID is a UK design and intellectual property campaigning trade association for designers and manufacturers. It is a not-for-profit organisation, funded by membership fees, that aims to provide tips, advice and guidelines to help members protect their intellectual property through a proactive IP strategy.