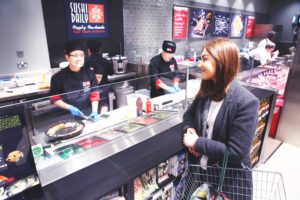 Waitrose launches its 50th sushi counter today (Tuesday August 1), at Hitchin in Hertfordshire, and will add up to 25 more by the end of January 2018.

The retailer said the move reflect the needs of modern day shoppers for convenient food and drink to take away or eat in-store.

Waitrose became the first UK national supermarket to offer sushi when it introduced a counter, launched in co-operation with Sushi Daily, at its Battersea store in November 2015.

Between February and April this year, sushi counter sales grew by more than 23% as the retailer delivered the fastest roll-out programme that Sushi Daily has experienced in the 10 countries in which it operates in Europe. Waitrose has opened more than 20 counters in the last six months.

Waitrose Canary Wharf, the retailer’s largest store, is delivering one of the highest turnovers in sales of sushi among Sushi Daily’s 600-plus counters.

Each Sushi Daily bar is headed by a team of sushi artisans, who prepare a range of hand-made sushi and maki every day in front of customers. Best sellers at Waitrose include the Salmon Crunch Roll, California Crunch Roll and the Avocado Maki.

Anthony Wysome, head of store development for Waitrose, said: “Sushi Daily counters add so much to our shops. The quality, freshness and theatre of the offer intrigues and excites customers.

“We’re delighted to have been able to expand this offer so quickly. Along with other successful new concepts like our wine bars, sushi helps us go beyond being just a supermarket to a place that provides great food in a vibrant, social atmosphere.”

Eight branches feature a wine bar where customers can enjoy a beer or wine by the glass, along with deli platters and tapas. There are also stores with juice bars, eat-in bakeries and cafes.

The grocer also recently introduced a ‘Kitchen’ concept in four shops which offers a choice of freshly prepared breakfast, lunch and dinner options throughout the day.

Waitrose operates 354 shops in England, Scotland, Wales and the Channel Islands, including 64 convenience branches, and another 27 shops at Welcome Break locations.