Survey reveals snacks left for Father Christmas across the country 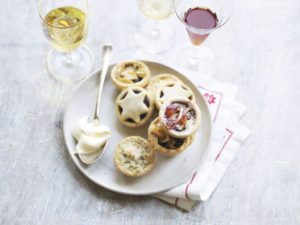 Families in the north-east are the most likely to leave a treat for Father Christmas this evening (Sunday, December 24) according to a survey by OnePoll on behalf of Waitrose.

More than 1,000 respondents revealed what food and drink they will be tempting Santa with this year. While a mince pie and tipple are still traditional choices, the study shows that snack and beverage choices are changing.

Sherry remains the most popular drink among UK households (14%) but whisky has narrowed the gap (12%). One in five parents in the north-east will leave out a tot of sherry and one in five families in the south-west will pour a tumbler of whisky for Santa. Beer is the alcohol of choice in Yorkshire, with 18% of households selecting a bottle of ale.

Mice pies remains the number one snack choice, with cake will the second most popular option. The latter is particularly popular among younger parents – 27% of 18-24 years olds will leave out cake. And Yorkshire is the region where Santa is most likely to enjoy a slice of Christmas cake (21%).

Cheese and biscuits are most likely to be put out in Wales (22%) and dads are twice as likely as mums to leave out a cheese board. For a healthier option Santa can head to London, where 23% of households will leave out a piece of fruit to make sure he gets one of his five-a-day, closely followed by the West Midlands and Northern Ireland (both 20%).

But a slice of pizza or a curry may be on offer instead this year, especially in the West Midlands, where 14% of households said they will leave out their leftover takeaway, followed by Londoners (11%). The results showed that dads across the UK are five times more likely than mums to put out their takeaway.

Finally, Father Christmas is most likely to receive a thank you message in Northern Ireland with almost 30% of children there writing a note, closely followed by the West Midlands (26%).