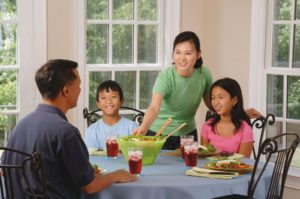 Over half of British parents believe their children are more likely to try new types of food than they were at the same age, according to a new survey.

The report also revealed that more than two-thirds of under-16s have tucked into Indian dishes while three quarters enjoy Chinese food. Three in 10 youngsters have tried Thai cuisine and almost a third have eaten a French meal. Vietnamese, Moroccan and Japanese are also among the foreign cuisines that children have sampled.

The study showed that parents are also likely to be braver with the food they try, with 78% admitting that they try to eat unusual or exotic food in front of their offspring to encourage them to do the same. And 55% have eaten something they didn’t really want to, so they didn’t put their kids off trying it for themselves.

Almost half of parents also admitted to choosing vacation destinations based on the food they are likely to find there, to broaden their family’s horizons. And two thirds deem their children ‘brave’ when it comes to trying new food abroad.

Hilton commissioned the survey to find out what today’s children like to eat, ahead of the launch of a ‘kids stay and eat for free’ deal. Patricia Page-Champion, senior vice president & commercial director at Hilton, said: “At Hilton, we’re committed to delivering exceptional experiences at every hotel, to every guest, every time. With our ‘kids stay and eat for free’ package, parents can enjoy a hassle-free holiday at hundreds of properties across Europe, Middle East and Africa so that the everyday heroes of the family can have a break too.”

Hilton has partnered with Disney to celebrate ‘The Incredibles 2’. Guests will receive a £10 Disney Store voucher when booking Hilton’s ‘Kids Stay and Eat for Free’ package which covers free breakfasts, lunches and dinners, in at least one of the group’s hotel restaurants.

Top 20 unusual or exotic foods tried by children under 16