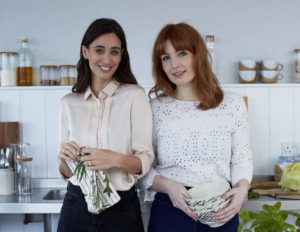 The capsule collection of Jackson & Levine table and kitchen linens will land on June 1 in Habitat’s London flagship stores and on habitat.co.uk, priced from £20.

Laura and Alice said: “Our collection includes the staples for dressing your dining table and kitchen. We’ve focused on creating informal, hand-crafted textiles and have worked with one of Habitat’s oldest suppliers in India to create designs on a khadi base cloth. This cloth is hand-spun and hand-woven in a traditional weaving village and has a beautiful relaxed quality to it.

“Each piece is entirely individual – not machine uniformity. A cool, neutral base stripe underpins the whole collection with printed botanical motifs, giving a nod to the foraged herbs we use in our cooking and table decorating.”

The collection’s arrival coincides with the launch of the duo’s first food book, ‘Round To Ours’, which has been designed to reflect the pair’s distinctive stylistic approach to their supper clubs, which are held regularly in the capital.

The title, which features 24 complete menus with advice on how to make each gathering extra special, will be published by Quadrille on May 18.

Sharing a love of food, the pair initially started a lunch club of two, cooking for one another when they had time off between their jobs in TV and radio. A few months later, the friends decided to open the doors of Laura’s East London warehouse flat to cook for strangers too.

Guests were encouraged to make themselves at home, to put on a record and to get to know their table companions as the feast unfolded. The evenings soon became the hugely popular, with tickets to the intimate dinners selling out in seconds.

Hailed as the “hottest supper club of the year” by ‘Observer Magazine’ in 2016, Jackson & Levine has grown into a thriving food and lifestyle business which encompasses writing (the duo have contributed food columns for Company magazine and Elle.com) and now publishing. Laura and Alice also create one-off experiences, host talks and curate major events.

Share
Previous The rise of the ‘Terrennials’: millennials reach for their trowels
Next Dove Grey by Burleigh