Summer arrives at Waitrose with a cherry on top! 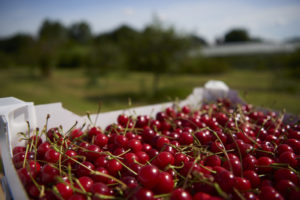 Divisional sales excluding fuel at Waitrose were up 0.2% last week (to Saturday June 23) compared with the same week last year.

The supermarket chain’s commercial director Rupert Thomas said: “The early part of the week faced tough comparatives as a result of hot weather this time last year. However, trade accelerated significantly as temperatures soared towards the weekend.”

He noted that despite the mixed bag of weather, horticulture performed strongly, with sales up 8%. Houseplants were popular too, up by 28%, and outdoor plant sales rose 15%.

Beers, wines, spirits and tobacco “had a good week” with sales up 2.4%. Wine performed particularly well (up 7%) while sparkling wine saw an uplift of 28%.

And, with the start of the British cherry season, Waitrose customers were able to pick up a punnet of the fruit from last Wednesday (June 20).

The retailer’s soft fruit and cherry buyer Nicki Baggott commented: “Cherries are such a well-loved summer fruit and we’ll be stocking a variety of Waitrose cherries throughout the season, including Morello, Kordia, Lapins, Sweetheart and Regina – some of which have been produced by family growers A R Neaves & Sons.

“Now in their third generation, they have been growing fruit since 1941 and are one of the south-east’s largest fruit growers. Their location and ideal brick earth soil makes them one of the earliest to produce the fruit for the British cherry season.”

Share
Previous Eat, Shop, Save returns to ITV for a new series
Next Gifts, Cook and Dine sales up 4% for John Lewis