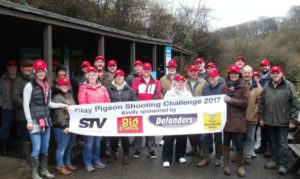 Thirty members and partners took part in the contest, which took place on November 18 at The South West Shooting School: a Clay Pigeon Shooting Association Premier Ground at Ilfracombe in Devon.

The results of the competition were:

-Joint 1st in the ladies was Lesley Sargent of Upton Home Hardware, and guest Melanie Pearse;

-1st in the men’s novice was Michael Smith of Home Hardware, 2nd was Jeff Abbott of Abbotts DIY.

Home Hardware chief executive Martin Elliott said “The standard of shooting was exceptionally high, considering half of the competitors had never used a shotgun before! Although the weather was against us, it was a very enjoyable afternoon – and our sincere thanks to STV for their very kind sponsorship which made the event possible.”