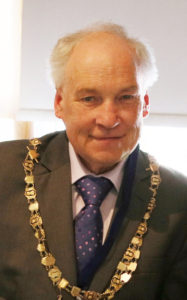 The company released a statement announcing the news on January 20. Headlined ‘RIP Boss’ and signed ‘Liane, Kayleigh and Derek’, it said: ‘It is with a heavy heart that we regret to inform you that sadly Stewart (Mr Munro) passed away on Thursday night. He had been fighting cancer for many years, but sadly it suddenly got the better of him.

‘Stewart has asked us to thank all of his loyal customers and friends for their continued custom over the 31 years he has been in Marchmont. He would also like to thank the wonderful suppliers for making the shop such a success.’

Stewart’s funeral will take place on Monday February 12 at 1pm in the Lorimer Chapel at Warriston Crematorium. The address is: Warriston Road, Edinburgh EH7 4HW.