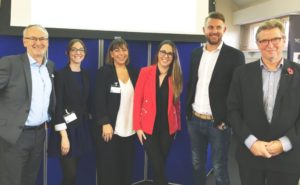 BHETA housewares sector director Will Jones opened the forum with a reminder to members to make the most of several BHETA opportunities. These include an export trade mission to Romania, grant availability for exhibiting members at German trade show Ambiente and the International Hardware Fair in Cologne, and the publication of the EPOS data courtesy of the BHETA GfK Quarterly POS Index.

Samm Swain of Lakeland outlined the housewares retailer’s history and revealed that its stores account for 64% of overall sales, followed by its website (28%) and catalogues (8%).

She said the secret to Lakeland’s longevity is “trust”; a quality which the company promotes and sustains through commitment to its test kitchen and the involvement of its customer ambassador in both product selection and returns. She also detailed the Lakeland customer profile to illustrate opportunities for suppliers of both branded and own-label products.

Chris Johnson gave an overview of Loadie, which is an online and mobile logistics marketplace that connects delivery drivers with distribution centres, warehouses and fulfilment centres.

He said this new service adapts B2C concepts familiar from Uber to the B2B market, by making the most of geolocation technology to enable suppliers to post fully trackable transport requirements at no cost and at any time, and available drivers to pick up and deliver for a pre-agreed charge (often avoiding the implications of a return journey with an empty vehicle).The potential for flexibility – especially for deliveries such as samples – was not lost on an enthusiastic audience.

Equally positive was a presentation from Jeff Moody of bira. He outlined the association’s programme of services geared to making independent retail easier and more profitable, its lobbying activities on business rates and the sale of knives and corrosive substances, and its stand on seeking a fair and level playing field for High Street retail.

Kelly also discussed some of the trends from the most recent EPOS data. These include the importance of comfort and simplicity in terms of products most purchased, the shift to lower volumes but higher price points and a decline in price comparison, as ‘tailored for you’ online offers become more prevalent.

The forum was followed by a meeting of the BHETA Surgery. This is a relatively new initiative where members can pre-submit business questions to the BHETA housewares committee for discussion. In the second Surgery of its kind, more than a dozen questions were submitted which, BHETA said, ‘stimulated as much discussion of industry issues as about individual queries’.

Commenting on the day, Will Jones said: “Everyone knows that 2018 has presented many challenges, but this BHETA forum proved an entirely positive event, full of really positive ideas, campaigns, commentary and opportunities. It was a sell-out crowd and just goes to show what a contribution to business well-being BHETA now makes in this sector.”

Information about future BHETA events can be found on the BHETA website www.bheta.co.uk or by contacting the BHETA Member Services Team on 0121 237 1130.