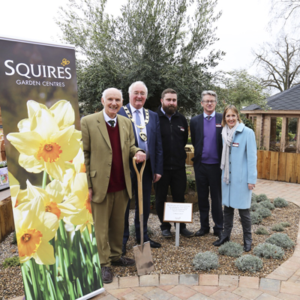 A plaque was unveiled on a 300-year old olive tree, planted by Colin to commemorate the opening. Invited guests were then taken on a tour of the garden centre, which has had a £1.5 million rebuild.

Billed as a boutique garden centre, it features a new shop offering a range of giftware, a new outdoor plant area, and a new café bar housed in a restored 200-year old octagonal lodge building.

Colin commented; “I’m very proud to officially open our new garden centre. Squire’s Chertsey is small but perfectly formed. We have a great team here, plus a few different products to make it a little bit extra special.”

Visitors today (Saturday March 4) and tomorrow (Sunday March 5) can take advantage of Squire’s Spring Fever event, with 20% off all garden furniture and BBQs. Next Saturday (March 11), the first 50 customers will receive a free packet of lettuce or spinach seeds.

All the centres have a café bar on site and free parking, while many include a children’s play area. Last year the retailer celebrated its 80th anniversary.