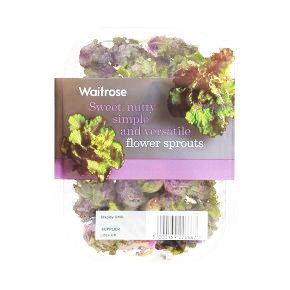 Latest sales figures from Waitrose & Partners reveal that Brussels sprouts are set to be an all-year-round kitchen staple with sales up 30% compared with the same time last year.

According to the supermarket chain, sales have been driven primarily by baby sprouts and Kalettes (known as flowering sprouts) which both have a milder flavour than the regular Brussels sprout. The Kalette resembles a small leafy flower but tastes more like kale – hence its name.

Figures from Waitrose.com also suggest that shoppers are looking to experiment when serving their sprouts, as recipe searches are up 38% compared with December.

The retailer said: ‘Brussels sprouts tick all the right boxes as they taste good, are great value and they’re easy to prepare. Kalettes are particularly good for you as they boast twice the amount of vitamin C as the average Brussels sprout.’

Paul Bidwell, vegetable buyer at Waitrose & Partners, added: “For the very best flavour and texture my main tip is to simply immerse them in boiling salted water for 3-4 minutes and serve al dente, seasoned and with a knob of butter. We also have lots of recipes online for shoppers looking for inspiration; our sprout mac & cheese recipes have a five-star rating.”