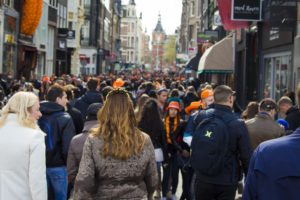 Footfall across UK high streets, shopping centres and out-of-town retail centres over the New Year Weekend is set to lift strongly year-on-year, according to the latest data from Springboard.

The retail intelligence expert said its prediction will ‘restore optimism amongst retailers for a modest end to the year in terms of sales’.

With the Christmas trading period – which saw footfall decline by 3.3% year-on-year in December up to Christmas – now largely over, Springboard estimates footfall will rise by 6% over the New Year Weekend (from Saturday December 30 to Monday January 1 inclusive) compared with 2016.

On New Year’s Eve (Sunday), footfall is forecast to rise by 3% compared with 2016, due partly to ‘the greater demand for hospitality and eating out amongst consumers that has been evident throughout 2017’.

On New Year’s Day (Monday) footfall is set to lift by 13%.  This is attributed to a combination of last year’s huge drop in footfall of -24% due to very poor weather, and the fact that January 1 2018 represents the last day before people return to work – and therefore the last opportunity to shop. In 2017, New Year’s Day fell on Sunday so consumers were still able to shop on Monday January 2, before returning to work on Tuesday.

Springboard insights director Diane Wehrle commented: “Footfall on New Year’s Day is forecast to rise by 13% overall, with the greatest increase of 15% in high streets due to their wide range of food and beverage offerings. However, footfall in retail parks and shopping centres is also forecast to increase, by 10%and 10% respectively. Much of this rise will be a bounce-back from the significant decline of -24% on New Year’s Day 2017 when there was severe wind and rain, which deterred consumers from venturing out to retail destinations.”