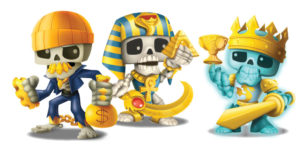 The deals are with Spearmark for housewares and lighting; Aykroyds & TDP for nightwear, underwear and swimwear; and Blues for daywear and outerwear.

Treasure X has sparked a playground craze: children dig through the soft rock of the Treasure X brick to reveal a collectible skeleton figure and a treasure chest that might just contain treasure dipped in real gold. They chisel through the brick using the plastic X-cavator tool until they find the prize, and then add water to the chest to uncover the treasure with a fizzing reaction.

There are action figures and character teams to reveal and collect. The toys are supported with a marketing campaign including television and digital advertising, webisodes and social media.

Bulldog licensing director Vicky Hill said: “We are delighted to announce these new deals for Treasure X. Sales of the core product are absolutely booming, so it’s no surprise we have so much attention from the licensing sector – and these agreements are just the start. The sky is the limit for Treasure X!”