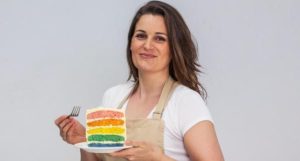 After 10 weeks and 30 challenges, Sophie Faldo was crowned winner of ‘The Great British Bake Off’ on Channel 4 last night (Tuesday October 31).

In the eighth series of the competitive baking show, Sophie was announced as the champion of 11 contestants by judges Paul Hollywood and Prue Leith.

Sophie, 33, is a former Officer in the Royal Artillery, who did not discover her talent for baking until she volunteered to make a friend’s birthday cake. The psychology graduate, who lives in Surrey with her boyfriend, then developed a passion for patisserie

At the end of last episode, Sophie said: “I don’t think I will forget this day for as long as I live. I have met some brilliant people and I got to the Final. What a privilege.”

Looking back on her experience, she commented: “I was happy with most of my bakes, but my favourite was my Entremet dessert[called Ode to the Honey Bee] in the Final, particularly as I hadn’t based it on anybody else’s recipe; it was all my own. I had researched it and it came from my obsession with honey, I was inspired by the flavours [honey, lemon and lavender] and then based the Entremet around that.

“My best moment was the Hollywood Handshake I received for my signature bake [Fruity Cake] in week one. That was my first ever challenge, and then I got really good comments from Paul and Prue for my technical in Patisserie week, for my Les Miserables [cake]. The judges said it was one of the most difficult technicals ever set in ‘Bake Off,’ and to get good judging made me feel great.

“My worst moment was in week four when my Millionaire’s Shortbread wouldn’t set, and also in Forgotten Bakes week, because I didn’t get as good judging for my signature and technical. It was the Showstopper of my Savoy Cake which saved me.

“My favourite challenges throughout the series were probably in Patisserie Week, for obvious reasons! Bake Off has broadened my baking expertise, but my biggest love has to be patisserie.

“At home I bake batches of bread and freeze them, and I bake cakes for friends and people at my gym. I love decorating cakes, and you get a great sense of pride in finishing a cake that may have taken a couple of days to decorate and finish.”

Looking ahead, she said: “I never ever dreamed I would get to the Final – let alone winning – so I’m not sure where I will go from here. It would be wonderful to write a patisserie book, but let’s see what comes my way. I would like to try travelling the world for inspiration for starters.”

Sophie and the 11 other bakers who competed in the show will join TV host Jo Brand on ‘The Great British Bake Off: An Extra Slice’ tomorrow (Thursday November 2) at 10pm on Channel 4.