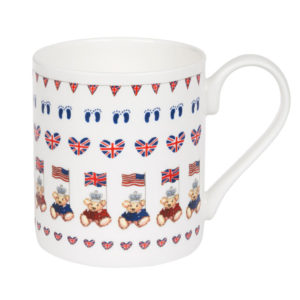 Homewares designer Sophie Allport has launched a commemorative mug to celebrate the imminent arrival of The Duke and Duchess of Sussex’s first child.

Sophie said: “I’m such a fan of the Royal family and really wanted to design a lovely keepsake for people to treasure. Prince Harry and Meghan are such a popular couple and I think both nations are really excited for them.”

Once the birth is officially announced detailing the baby’s full name, Sophie’s mugs will be personalised by hand in Stoke-on-Trent. The full name and date of birth will be handwritten by Sophie and then hand applied on the inside rim of every mug. The mugs will then be fired and boxed ready to be delivered to customers. “I think it’s really important that our commemorative mug features the full name and date of birth to make it a personalised keepsake,” explained Sophie.

Sophie Allport’s Royal Baby 2019 mug will retail at £13.50 and can be pre ordered on 01778 560256 or from www.sophieallport.com . The mug will be dispatched two weeks after the name has been announced. The new royal baby mug complements the other royal mugs in the Sophie Allport commemorative collection.