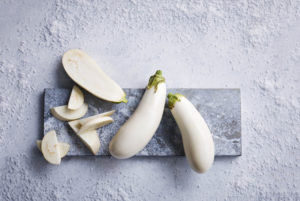 As the country enjoys the sunshine, Waitrose shoppers will find snow on the supermarket chain’s shelves this month, in the form of ‘snowbergines’.

This is the nickname given to white aubergines which are hitting Waitrose branches nationwide for the first time this week.

The grocery multiple said: ‘Early varieties of aubergine were traditionally white skinned, which coined the name ‘eggplant’ in America, as they resembled goose eggs.

‘The white aubergines we are launching are similar in shape to the regular purple variety but slightly smaller. They are creamier and milder in taste, giving them a wonderful capacity to take on other flavours, including tomatoes, spices or cheese. They also absorb less moisture, meaning they soak up less oil, resulting in a lower calorie dish.’

Waitrose vegetable buyer Jade Symonds commented: “Aubergines are particularly popular during the summer months as they are great for grilling.

“It’s the perfect time to introduce a new speciality range of aubergines, which includes our ‘snowbergine’ as well as a striking purple and white striped variety.”

The white aubergines, which are grown in Holland, are available until the end of the month at £1.35 each for both the white and the purple and white striped varieties.

Share
Previous Which? names its top brands of 2017
Next Sainsbury’s doubles its range of alternative milks