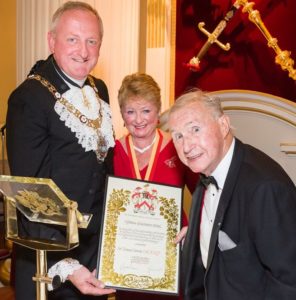 Sir Terence Conran, one of the world’s best-known designers, retailers and restaurateurs, has been given a Lifetime Achievement Award by The Furniture Makers’ Company – the City of London livery company and charity for the furnishing industry – in recognition for his outstanding contribution to the design and furnishing sector.

Sir Terence was presented with the award by the Lord Mayor of London Alderman Peter Estlin at the Mansion House in the City of London during the Installation Dinner of The Furniture Makers’ Company’s newly installed Master, Dids Macdonald OBE, on May 14.

Born in 1931, Sir Terence founded the Conran Design Studio in 1956 and in 1964 opened the first of the Habitat chain of home furnishing stores. Later he established The Conran Shop and opened stores in London, Paris, New York and across Japan.

Throughout his career, Sir Terence’s companies have designed, owned and operated shops, restaurants, hotels, bars and cafés around the world as well as working across the fields of architecture, interiors, products and graphics.

In 1989 he founded the Design Museum in London, the world’s first museum dedicated to design, which moved to larger premises in the former Commonwealth Building in Kensington in 2016.

Today Sir Terence designs furniture for Benchmark, Content by Terence Conran and The Conran Shop, and remains involved in the restaurant industry through The Boundary and Bibendum. He has written over 50 books that reflect his design philosophy and is an honorary professor of the University of the Creative Arts.

Now in its 10th year, the Lifetime Achievement Award is the highest honour that The Furniture Makers’ Company can bestow on an individual in the furnishing sector.

Dids Macdonald OBE, Master of The Furniture Makers’ Company, said: “Sir Terence has been a pioneer and game changer in British design and has been an inspiring influence in our lives in more ways than we can imagine.”

Commenting on the award, Sir Terence said: “In my heart I’ve always considered myself a furniture maker; it has given me more pleasure than anything else during my rather long career. As a very young boy I vividly remember the absolute joy of finally finishing making my very own bookcase and it has been in my bloodstream ever since.

“So it was truly thrilling to be recognised by The Furniture Makers’ Company and to enjoy a very special evening with fellow craftspeople who share my love of making furniture. One of my big fears is that as a nation we often appear to have lost the joy of making things, so it was uplifting to be surrounded by passionate furniture makers and see that the talent and passion in our industry burns as brightly as ever.”