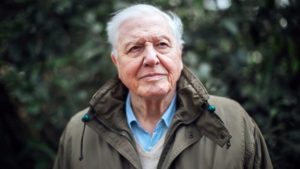 Sir David Attenborough is to present and narrate a new film entitled ‘Climate Change: The Facts’ for BBC One.

The broadcaster said: ‘The documentary will look at the science of climate change and the potential solutions to this global threat, combining footage that reveals the already devastating impact of climate change on our planet with interviews from some of the world’s leading climate scientists.

‘After one of the hottest years on record, climatologists and meteorologists will explain the effects of climate change on both the human population and the natural world. Scientists, including Dr James Hansen, Dr Michael Mann and Professor Catherine Mitchell, will forensically unpack the science behind the extreme weather conditions of recent years, which have seen unprecedented storms and catastrophic wildfires; as well as detailing how the accelerating rate at which the world’s ice is melting is causing sea level rises, and how deforestation is exacerbating the problem of global warming by adding to CO2 in the atmosphere.

‘The film will deliver an unflinching exploration of what dangerous levels of climate change could mean for human populations, and what is likely to happen if global warming exceeds 1.5 degrees and if major reductions in CO2 emissions are not made in the next decade.

‘The documentary will also look at potential solutions, exploring the innovations, technology and actions that the world’s governments and industries are taking to prevent further warming, and showcasing individuals who are creating change at grassroots levels.’

Sir David Attenborough said “In the 20 years since I first started talking about the impact of climate change on our world, conditions have changed far faster than I ever imagined. It may sound frightening but the scientific evidence is that if we do not take dramatic action within the next decade we could face irreversible damage to the natural world and the collapse of our societies. We’re running out of time but there’s still hope… I believe that if we better understand the threat we face, the more likely it is that we can avoid such a catastrophic future.”

BBC director of content Charlotte Moore commented: “There is a real hunger from audiences to find out more about climate change and understand the facts. So it feels right to address the issue. We have a trusted guide in Sir David Attenborough, who will be presenting an engaging and informative look at one of the biggest issues of our time.”

The one-hour film will air this spring under the ‘Our Planet Matters’ banner which begins with BBC One’s ‘Blue Planet Live’, presented by Chris Packham, Liz Bonnin and Steve Backshall, which explores the health of our oceans and marine life in three locations across the globe; and ‘Blue Planet UK’, presented by Gillian Burke and Steve Brown.

There will be future programmes exploring subjects including the use of plastics with Hugh Fearnley-Whittingstall and Anita Rani, over-population with Chris Packham, and meat production with Liz Bonnin, while Gordon Buchanan will be giving the planet a health check from the air.