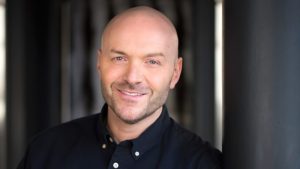 Simon is best-known for being the chef and co-presenter on Channel 4’s ‘Sunday Brunch’. He has presented and cooked across many shows and channels including BBC, ITV, Channel 4, Channel 5 and UKTV; and his credits include ‘Tricks of the Restaurant Trade’, ‘Breaking into Tesco’s’, ‘Eat the Week’, ‘Great British Menu’ and ‘Win It, Cook It’.

Aside from his TV work, Simon has also written and published five cookbooks and he regularly contributes to food magazines. He is a chef/owner of nine restaurants in the north-west England and one in Dubai.

Simon says: “I am so excited, terrified and proud to be invited to be part of Strictly 2017. I’ve always been a huge fan of the show. When I put on my sequins and hit the floor it will genuinely be my very first time dancing ballroom and latin. Nobody will try harder, have more fun or get more out of it than me. I can’t wait.”

He will join fellow contestants Joe McFadden, Reverend Richard Coles, Gemma Atkinson, Ruth Langsford, Davood Ghadami and Mollie King when the 15th series of the BAFTA award-winning show will return in the Autumn.

More celebrity contestants will be announced in due course.