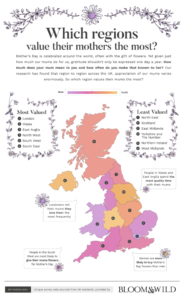 With Mothering Sunday coming up this weekend (March 11), a survey by Bloom & Wild has investigated how different regions in the UK value and celebrate their mums.

According to a poll of UK residents by the flower delivery company, Londoners – followed by the Welsh and East Anglians – value their mums the most. The north-west, south-west and south-east round off the list of the most appreciative regions.

Some 45% of Londoners regularly tell their mum that they love her – and they’re also the most likely to treat their mums on Mothering Sunday.
People in Wales and East Anglia are best at spending quality time with their mums with 40% doing so on a regular basis

Scottish folk emerged as the least likely to celebrate Mothering Sunday, with 35% saying they don’t officially celebrate the occasion. But, as Bloom & Wild, comments ‘this may be because they don’t feel they need a holiday to celebrate how special their mothers are’.

The research also revealed that women are more likely to buy flowers for their mums than men. Last year 70% of flower orders for Mother’s Day through Bloom & Wild were made by women, with people in the south-east buying the most.

Bloom & Wild marketing director Jim Warren said: ‘‘Mother’s Day is a really special opportunity for families to show their mums (and people who have been like mums to them) how much they’re loved.

‘Our research shows that one-fifth of Brits choose to celebrate Mother’s Day by buying flowers, and that sending a beautiful bouquet is still one of the most popular ways of saying ‘You’re the best’.”