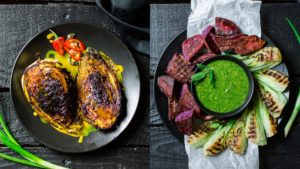 Demand for vegetables from Africa, Asia, North and South America and the Caribbean has rocketed at Tesco stores. And their popularity is not restricted to the supermarket chain’s major inner city branches either, with sales soaring in towns across the country.

Among the most popular exotic vegetables at Tesco over the last 12 months are:

-Dudhi from Asia (sales up 25%): similar to a courgette, this is suitable for stir-frying and can be added to curry dishes or tossed into salads.

-Plantain from the Caribbean (sales up by more than 60%): looks like a large banana but is less sweet, the plantain is used like a potato in Caribbean cooking. It can be added to stews or casseroles, grilled or baked.

-Okra from Africa and Asia (sales up by 24%): this vegetable is chopped and added to a curry, with vegetables or meat.

-Chayote from South America (sales up by nearly 80%): similar in taste to a courgette with a pale green cucumber-like flesh. It is popular as a side dish when mixed with potato to create a chayote squash.

-Cassava from South America (sales up by more than 40%): a root vegetable with an earthy, nutty, and slightly sweet taste that can be boiled and mashed to be eaten as a side dish.

-Purple Sweet Potato originally from Japan but now grown in North America (sales up by nearly 125%): a richer tasting member of the sweet potato family

-Sivri Chilli from Turkey (sales up by nearly 500%): a long, green medium-heat chilli that is commonly found in takeaway kebabs.

-Turmeric from the Indian Sub-Continent (sales up by 80%): a root vegetable with a mild, peppery flavour that is popular as an ingredient in smoothies, curries and soups.

Tesco exotic vegetable buyer Katie Frost said: “These wonderful exotic fruit and vegetable varieties may be new to some shoppers but are a mainstay of Caribbean, Asian and African cuisine.

“Demand for them is soaring as a direct result of a new adventurism and passion that is sweeping through home cooking, inspired by celebrity chef TV food shows. Programmes such as ‘Rick Stein’s India’ and recipes by other celebrity chefs such as The Hairy Bikers and Jamie Oliver have inspired people who love cooking to try new ingredients.”

Chef Derek Sarno, Tesco’s director of plant-based innovation, noted that the vegan food revolution has also created ‘a spirit of adventurism’, with more shoppers prepared to try out new vegetables. “Being easily able to find these world fruit and vegetables in local supermarkets has helped drive demand,” he said. “These days more and more shoppers are picking up plantains, fresh turmeric or purple sweet potatoes with their carrots or broccoli.”