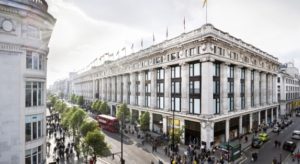 The retailer said sales and operating profit growth were delivered ‘against a challenging retail backdrop, and continuing major investment across the business, in both stores and digital platforms.

‘Accessories has been the major category highlight, reflected in the completion of its new Accessories Hall in London and the opening of major boutiques, such as Louis Vuitton and Tiffany in our Birmingham store.

‘There was strong growth in digital, which was supported by significant investment in our Chinese language transactional website, an android app, and a UK and international delivery proposition, through the Selfridges Plus subscription service’.

Selfridges Group managing director Paul Kelly said: “Selfridges has delivered another excellent performance in 2017/18, and we have continued our ambitious programme of capital expenditure across all channels and stores.

IGDS said the award acknowledges that Selfridges’ ‘outstanding leadership in delivering extraordinary customer experiences, driven by exceptional business acumen, combined with consistently brave creativity and an unwavering commitment to sustainability’. IGDS is the largest association of department stores worldwide, with 42 members from 38 countries. Its Summit, held every two years, is the world’s only department store-focused discussion platform.

Paul continued: “Significant investment, long-term planning and successful implementation remain the key elements in our drive to remain at the forefront of global luxury retailing. This year Selfridges is planning further development of its digital capabilities and the completion of a four-year £300 million capital expenditure programme, which has already transformed the London store. This includes a new triple height entrance on Duke Street, linking the historic 1909 building and the 1930s extension.

“The London store also now boasts the largest destination for luxury accessories in the world, housed within its new 60,000sq ft Accessories Hall and completed by the opening, this August, of a new eyewear destination, offering the largest selection in the UK.”

“We continue to challenge ourselves to be daring in all aspects of our global strategy and to present extraordinary destinations for our customers. We are optimistic for further growth in 2018, with more new openings and all to play for in the run-up to Christmas – where you can expect the unexpected.”

Founded in 1909, Selfridges operates four stores in London, Birmingham and Manchester (at the Trafford Centre and in Exchange Square), along with Selfridges.com: an international website that delivers to over 130 countries, trading in eight currencies.