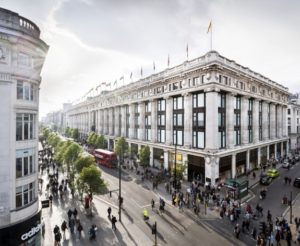 Selfridges has been recognised as the Best Department Store in the World for an unprecedented fourth time, and will retain the honour until 2020.

IGDS is the largest association of department stores worldwide, with 42 members from 38 countries. Its Summit, held every two years, is the world’s only department store-focused discussion platform.

Founded in 1909, Selfridges recorded sales of over £1.6 billion in the year ending January 2017. It operates four stores in London, Birmingham and Manchester (Trafford Centre, Exchange Square), along with Selfridges.com: an international website that delivers to over 130 countries, trading in eight currencies.

Selfridges will complete a £300 million capital expenditure programme by the end of 2018. The project includes a transformation of the flagship London store on Duke Street, with a new grand entrance and a new Accessories Hall, (designed to become the largest destination for luxury accessories in the world), plus the launch of a Selfridges app and an expansion of Selfridges.com.

In June 2010 Selfridges was named Best Department Store in the World by IGDS and retained the title for an unprecedented three times consecutively.

Selfridges managing director Anne Pitcher commented: “We’re thrilled to have Selfridges recognised again as the best department store in the world. This award is a huge honour and perfectly timed, as we near the completion of our transformation programme for Selfridges London.

“It’s also a great tribute to the commitment of our teams and gives us even greater inspiration to exceed our customers’ expectations in delivering extraordinary experiences.”

Share
Previous Tesco Direct set to cease trading next month
Next Amazon to create 2,500 permanent jobs in the UK in 2018