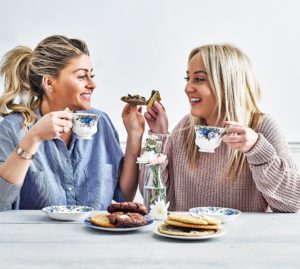 Following a successful pop up at Selfridges in May, baking duo ‘Blondies Kitchen’ have returned to the London department store to launch their first permanent milk and cookie bar in its Foodhall.

The concession, which launched on September 14, serves six cookie flavours and three types of milk, plus new additions including vegan cookies such as ‘The Nana’ (dark chocolate and banana); ‘Milk ’n’ Dough’ cups (safe-to-eat cookie dough with a shot of milk); Funfetti vegan cookie dough (rippled with colourful sprinkles); and 12in Cookie Pizzas, which can be taken away in a pizza box or purchased by the slice.

Chelsie spent over two years at ‘BBC Good Food’ magazine as a cookery writer, developing and writing recipes for the magazine and online. Kristelle has worked in restaurants for four years including Riding House Café and as head chef at Black Truffle deli in Primrose Hill for over a year.

The duo built a relationship through social media and started catering together to see how well they worked as a team – and on a trip to New York, they became obsessed with American style cookies. They realised there was nothing like it in the UK, so decided to bring it back.

Share
Previous Dulux announces 2018 Colour of the Year
Next ITV unwraps new consumer series: ‘How To Spend It Well At Christmas’