Scratch cooking heats up in the UK 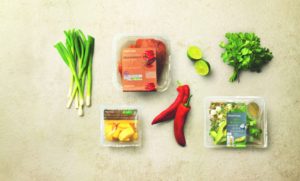 New research from Waitrose & Partners has revealed that we are a nation of scratch cooks.

The findings of a survey of research 1,000 adults conducted in April by the supermarket chain showed that over half of us (54%) cook from scratch at least four times a week. However, while we love scratch cooking, we want to make it snappy with nearly half of respondents cooking their weekday evening meals in 30 minutes or less.

The retailer claimed these cooking times can be attributed to the change in dishes people are now looking to create. Main meals are getting simpler, it said, with many people opting for lighter or healthier cooking methods and in many cases cutting down their meat consumption.

The figures follow recent data that highlighted that the UK spends more time preparing food and drink at home than the French, Spanish and Portuguese.

Supporting Waitrose’s latest ‘Beautifully Simple’ campaign, the research also showed that people are cooking more adventurously at home, using recipes from other international cuisines. Searches on Waitrose.com for recipes including Tonkatsu sauce have risen by 71% in the last year, while searches for Pad Thai kits have grown by 178%.

Martin George, customer director at Waitrose & Partners, said: “It’s clear we’ve become a food-loving nation but shoppers want to make meals in a way that’s practical for everyday life, even when they’re cooking from scratch.  So recipes must be inspiring but simple and it’s got to be super-easy to find all the ingredients.”

According to the study, nearly three-quarters (74%) of those polled said they want to cook different dishes but often find new recipes too complicated or time consuming, with 22% of people saying they lack confidence in trying out new meals. But many find using shortcuts helps them to cook from scratch, with half saying they do this for weekday meals. What people perceive to be an ‘acceptable shortcut’ includes using pre-chopped, frozen or tinned vegetables and readymade pastry.

Waitrose said: “‘Beautifully Simple’ aims to inspire customers to cook tasty, everyday meals with a small number of fresh ingredients. The no-fuss recipes have been created so that you’re only ever a few straightforward steps away from a tasty home-cooked meal.

“The campaign line ‘Beautifully Simple recipes. Simple to Shop. Simple to Cook’ highlights the dual benefit of recipes that are quick and straightforward to cook – but also simple to shop as all the ingredients are merchandised together in Waitrose & Partners.”
The push will also feature in national newspapers, video on demand, out of home posters, social channels, direct mail, the website, POS and weekly free customer newspaper ‘Waitrose Weekend’.