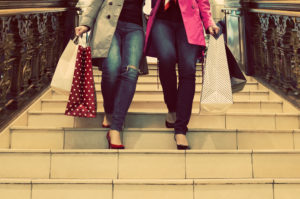 Scottish retail sales rose by 3.9% on a like-for-like basis last month compared with April 2018, when they dropped by 3.8%, according to figures from the Scottish Retail Consortium-KPMG.

This is above the three-month average of 0.9%. However, the figure is positively distorted by the timing of the run-up to Easter, which was in April this year but in March last year.

Scottish Retail Consortium head of policy & external affairs Ewan MacDonald Russell said: “An Easter bounce for retailers with April’s Scottish sales figures is the best of 2019. Whilst the figures were flattered by the distortion caused by the run-up to Easter falling in March last year, there does seem to have been a small bounce in consumer spending which will raise spirits on the High Street after what feels like a very long and flat winter.

“Easter weekend is always a strong time for food sales, and that’s reflected in an 8.6% rise on the 2018 figures. A large portion of that rise is due to Easter and school holidays falling differently this year, but it’s a strong result during an important trading period for food and drink retailers. Businesses noted that while traditional foods did well, there was a rise in consumers looking at healthier alternatives.

“Non-food sales were also positive in April, although not to the same degree. Overall, consumers limited that spending to smaller items, and we are concerned that they are continuing to defer larger spending, reflecting [the fact that] household finances continue to be under pressure. With that in mind, it’s important that policymakers continue to keep consumers at the front of their minds as they consider any further initiatives which could hit those households.”

KPMG UK head of retail Paul Martin added: “Total sales grew by 4.4% in April and while much of this is thanks to the distorting effects of the Easter bank holiday, retailers can breathe a temporary sigh of relief.

“The good weather proved to be both a blessing and a curse for retailers, with some shoppers choosing to refresh summer wardrobes while others venturing into the great outdoors and away from the shops.

“Outdoor furniture sales fared particularly well in April, as did outdoor toys for children, with parents endeavouring to keep youngsters entertained over the long weekend.

“Food retailers were the clear winners once again, as families and friends came together over the Bank Holiday for Easter feasts, albeit inflation – set at 2.2% in April – contributed to this 8.6% growth.

“April may have eased the pressure on retailers somewhat, but the new tax year also presents retailers with additional costs, from increased minimum wages to additional pension contributions.”

Share
Previous BRC-Springboard: footfall dips 0.5% in April
Next Lakeland celebrates 40 years in the heart of Chester