22nd May 2019 News Comments Off on Scotch egg set to make a comeback as this summer’s staple snack 1,563 Views 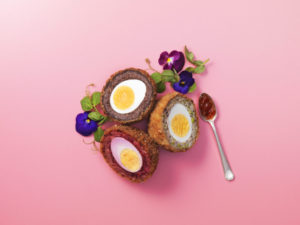 The classic Scotch egg is getting a makeover this summer as part of the new Waitrose & Partners Scrumptious Summer range.

The grocery chain said: ‘This retro classic, a popular party food of the 1970s, has been slowly making its way back into fashion, appearing on gastro pub menus and supermarket shelves – and is set to be the foodie trend of the summer as the picnic staple makes its way back into baskets again.’

The retailer said Scotch eggs are already proving popular this year. Early spring sales are up 8% already and shoppers are searching for the food online too, with searches up 44% year-on-year on www.Waitrose.com.

Jonathan Moore, executive chef at Waitrose & Partners, said: “The idea behind our Scrumptious Summer range was to take nostalgic food and flavours and reinvent them in a modern way. The trend for Scotch eggs is on the rise and we know our customers enjoy unusual flavour combinations – so we took the make-up of the Scotch egg and reinvented it with a modern twist.”

Meanwhile, the Heston from Waitrose The Scotch Egg – a chocolate and yuzu based chocolate version, introduced at Easter – has been such a hit that the grocer has increased orders of the cocoa-based confection. The sweet treat is will now be available throughout the summer.