22nd May 2019 News Comments Off on Sainsbury’s launches Future of Food report 1,334 Views 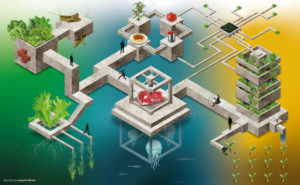 Space farms, food on prescription and jellyfish suppers are all predictions which feature in the Future of Food Report, commissioned by Sainsbury’s for its 150th Birthday Week (May 20 – May 27).

In the study, futurologist consultancy Department 22, food historian Dr Polly Russell and plant scientist James Wong explore what we will eat in 2025, 2050 and 2169.

Sainsbury’s head of quality and innovation Claire Hughes commented: “Sainsbury’s has been feeding the nation for 150 years, starting with butter, right through to the incredible array of products available today. We have a long history of innovation in food, and we look forward to continuing that over the next 150 years.

“We know that we have a role to play in expanding the nation’s diets – seen recently with our introduction of plant-based ranges – as the current foods we eat aren’t sustainable for a growing global population that will increase to 9 billion in 30 years, and over 11 billion in the next 150 years.

“By 2169, working alongside our suppliers and producers, we predict to have introduced foods like jellyfish and patch dinners to the British diet which are not even fathomable today.”

1. Food as medicine
In five years, we could see health professionals prescribe dietary advice as preventative health. Bio-fortified foods such as Chestnut Super Mushrooms – which are boosted with Vitamin D and B12 – are already on the shelves of Sainsbury’s. Biofortification as a method is predicted to become widespread by 2025, at a time when nutrition could be a recognised tool used to proactively prevent chronic diseases.

Plant scientist James Wong said: “For decades, diets have been simplified to include core ingredients that provided sustenance – and with that, we have witnessed a decline in the varieties of some ingredients. However, what we are seeing now – especially with the explosion of plant-based foods – is that diversity in food is returning to the British diet, including ancient crops like quinoa and south-east Asian staples such as jackfruit. With that increasing variety in diets comes more understanding of where our food comes from and a deeper appreciation of food production.”

Food historian Dr Polly Russell added: “Throughout history, food trends have been determined by a complex range of economic, political, social and technological factors. Although in many ways how we shop, eat and cook looks radically different from 150 years ago, there are some things which will never change – food has always been an important part in bringing people together. So, even if we end up relying on patch or pill dinners for our physical health by 2169, food will still play a key part in our emotional, social and psychological wellbeing.”