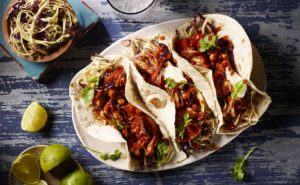 Jackfruit, also known as jack tree, is a species of tree in the fig, mulberry, and breadfruit family, native to South India. The grocer says the ‘unusual, but versatile, fruit tastes like a cross between a pineapple and a pear’.

Pulled jackfruit was hailed as a Google trend ‘rising star’ in 2016 and has been championed by street food outlets such as Dishonor, Spice Box and Club Mexicana.

Also part of the new range is Shroomdog, which Sainsbury’s calls ‘a veg-based take on a classic sausage’. Made of mushrooms, it comes in two flavours: Caramelised Onion Shroomdogs Vegetable Sausages (400g, £2.50) and Cumberland Shroomdogs Vegetable Sausages (400g, £2.50). According to Sainsbury’s, ‘both deliver the flavour and texture that you’d expect from a top-quality banger, yet are over 80% less fat than its meaty equivalent’.

Another addition is Mushroom Mince (250g, £1.50) which is ‘a lighter alternative to traditional meat mince’ that can be used in a Bolognese, shepherd’s pie or chilli con carne. The retailer said both the mince and Shroomdogs are made using ‘ugly’ mushrooms, helping to tackle food waste.

The new range includes Roasted Cauliflower Steaks (210g £2) that come with a Chimmichurri marinade and Indian-inspired Cauli Burgers (225g, £2) too.

Sainsbury’s product developer for fresh produce Georgina Lunn commented: “With over a quarter of meat-eating Brits actively reducing their meat consumption, there is a clear appetite for exciting and new ways to introduce more vegetables into our lives.

“Our new range of plant-based products provides innovative, inspirational solutions for everyday meals. From our supermarket-first pulled Jackfruit, to the super-satisfying Shroomdogs, we’re really proud to be offering a wide choice of flavours and can’t wait to hear how our customers are using them.”

The new by Sainsbury’s range can be found in the vegetable aisle.