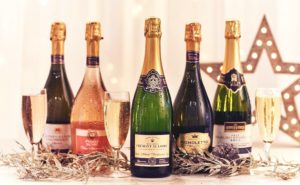 Sainsbury’s is predicting that Saturday (December 23) will be known as ‘Sparkling Saturday’, with the supermarket chain shoppers expected to buy 489,000 bottles of fizz in a single day.

The retailer explained: ‘With Christmas Day falling on a Monday, sales are set to ‘pop’ as shoppers do their final preparations for the big day that weekend.’

The Italian white wine Prosecco accounts for over 65% of Sainsbury’s annual fizz sales, and the grocer says its popularity has paved the way for alternative sparkling wines, such as Crémant de Loire, which it is hailing as ‘the next big thing; French sparkling wine but without the Champagne price tag’.

Sainsbury’s forecasts that 2017 will be the ‘year of Crémant’. Made using the same traditional method as Champagne, Sainsbury’s Crémant hails from the chalky soils of Saumur in the Loire Valley, where conditions are suitable for producing a distinctive Blanc de Blancs style.

Sainsbury’s expects December to be a bumper month for the sparkling newcomer. After a 528% rise in sales in the past year, demand has led to the introduction of a magnum, just in time for Christmas.

Elizabeth Newman, head of beers, wines and spirits at Sainsbury’s, said: “While Champagne sales peak at this time of year, the alternative sparkling wine market is really booming. Prosecco continues to be an area of strong growth for us (our Taste the Difference variety is up 23% year on year) but its rise has also opened Brits’ eyes to the breadth of sparkling wines out there.”

Meanwhile, premium gin sales continue to soar and are also set for a festive boost, according to Sainsbury’s. While whiskies, sherries and ports may be more closely associated with Christmas, it’s gin that’s top of the list for Brits this year, the grocer said.

The botanical spirit has seen a 25% sales increase in the past 12 months and Sainsbury’s expects to sell 30% more bottles of gin this Christmas than last.

Gin has long been the third biggest spirits category after whisky and vodka but recently it has been catching up with its rivals. In the past year, the gap between gin and vodka has narrowed from 25% to 10% and shows no signs of slowing.

Judith Batchelar, director of Sainsbury’s Brand, said: “Brits’ appetite for gin is seemingly insatiable – and a lot of the growth is coming from premium and craft gins. With shoppers becoming more discerning in their choices, we are expecting to see a festive boost to premium gins in particular

“While many will buy gin to drink during the party season, we’ve also seen a rise in sales for gifting. Beautiful bottles of premium gin have become a popular alternative to the more traditionally gifted bottle of single malt whisky.”

The gin revival has resulted in a boom in premium mixers, with experimental Brits looking to try new pairings and flavour combinations. In recent years, Sainsbury’s has seen a 90% rise in premium mixers, and has responded by launching a new range including Sicilian Lemonade, Mexican Lime & Mint and Scottish Raspberry & Pomegranate.

Judith said: “If you’ve got a taste for premium gin, you want a great quality mixer to match. With our new mixers made from the finest ingredients sourced from Scotland, Sicily and Mexico, shoppers will find the ideal accompaniment to their favourite tipple.”