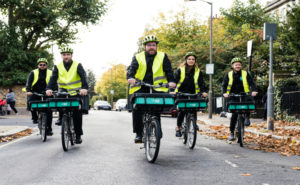 The service has now been extended to customers in five more London boroughs across Zone 1 and 2. Over 70,000 more postcodes have been added to the catchment area, taking its total reach to over 1.7 million customers.

Chop Chop is a service that enables customers to order up to 25 items from Sainsbury’s, via an IOS or Android app, and have them delivered by bicycle or moped within one hour, for a flat fee of £4.99.

Since its launch, the service has proved particularly popular with customers looking to purchase weekend brunch ingredients and baby emergency products, as well as ‘dinner for tonight’ items and post-party celebration remedies.

Shoppers who order via the app within store opening hours receive their groceries within an hour on the same day, depending on slot availability. The service is open seven days a week.

Clodagh Moriarty, director of online at Sainsbury’s, commented: “We’re delighted the trial of our Chop Chop delivery service in Wandsworth and Pimlico has proved such a success. Our ambition is to help our customers live well for less, and saving them time by offering one-hour delivery is one way we’re doing just that.

“We were the first UK supermarket to introduce one-hour delivery last year and this roll-out will give us the largest reach to shoppers across London.”

Chop Chop is now available in all or parts of: Barnet, Brent, Camden, City of London, Ealing, Hackney, Hammersmith & Fulham, Islington, Kensington & Chelsea, Lambeth, Merton, Southwark, Tower Hamlets, Wandsworth and Westminster. Customers can check if Sainsbury’s delivers to them by putting their postcode into the App.