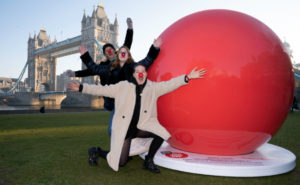 Supersized red noses popped up at landmarks across the UK on Monday (February 18) in the build-up to Red Nose Day, as Sainsbury’s celebrates 20 years as Comic Relief’s official retail partner.

From Blackpool seafront and Edinburgh’s Greyfriars Bobby to London’s St Paul’s Cathedral and the nose of Cornwall’s Mud Man, Sainsbury’s unveiled the giant red noses to mark the countdown to Comic Relief’s Red Nose Day telethon live on the BBC on March 15.

The noses will take pride of place during half term, with the retailer keen to encourage the public to get behind the campaign and show their support by finding the noses, taking a selfie wearing their very own red nose (for sale in Sainsbury’s), and tagging @Sainsburys, @ComicRelief and #RedNoseDay.

Sainsbury’s is also launching its first ever ‘Comic Receipt’ campaign, which gives customers who purchase Red Nose Day merchandise in its supermarkets or online the chance to win VIP tickets to see Ed Sheeran perform in Rome later this year, meet him and receive their very own signed guitar. Customers will receive a unique code on their receipt, which they enter online at www.sainsburys.co.uk/rednosedaycompetition.

This year 11 different nose characters have been launched for Comic Relief, including a rare green frog nose and an even rarer reversible nose which was designed by a UK school pupil. There is a special treat awaiting those customers who collect all 11 styles, as together the boxes can be transformed into Magical Sneezeland Castle.

For the first time ever, the red noses can also be brought to life through augmented reality, by scanning the QR code on the box with a smartphone and using the Red Nose App from the App or Play store.

The supermarket chain’s group head of corporate responsibility and sustainability Claudine Blamey commented: “We’re thrilled to be celebrating this 20-year milestone with Comic Relief and excited to launch our Who Nose Where campaign.

“We want to give people the ultimate red nose photo moment this half-term and hope the nation shows their support by snapping themselves in front of the giant sculptures, posing in their very own red noses and merchandise. Over the past 20 years we have raised a huge £120 million and we hope that this year will help make an even bigger difference to those who need it most.”

Comic Relief ceo Liz Warner added: “Sainsbury’s is a brilliant partner and it is always great to see the stores come to life with merchandise, red noses and more. We hope that, together with Sainsbury’s and Argos employees, we will raise millions of pounds to help fund projects locally and abroad – saving and changing lives.”

Since its launch in 1988, Red Nose Day has become something of a British institution. It’s the day, every two years, when people across the land get together and raise money at home, school and work. Comic Relief uses the funds to help people living tough lives across the UK and internationally.

Comic Relief is a British charity, founded in 1985 by the scriptwriter Richard Curtis and actor and comedian Lenny Henry, in response to famine in Ethiopia. The highlight of Comic Relief’s appeal is Red Nose Day: a biennial telethon held in March, alternating with its sister project Sport Relief.