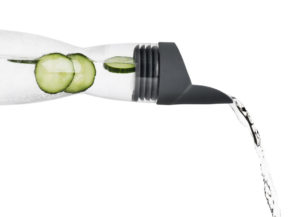 Sagaform has teamed up with London-based Studio Levien, in the Swedish brand’s first collaboration with a British product design house.

The housewares company’s brief to Studio Levien was to design products ‘that bring theatre to the table, distinctive yet familiar and with a smile’.

Sagaform’s Flip Top Carafe (pictured) is the first product to emerge from the collaboration. Made from glass and silicone, it is a flip-top serving jug that prevents ice from coming out , as well as stopping spills as you pour, thanks to a built-in filter system. With a 1 litre capacity, it comes in three colourways of red, grey and blue, and retails at £30.

Award-winning designer Robin Levien, who headed-up the project, said: “The innovation is all in the lid which combines a cover, an ice-retaining grid and a pouring spout. The design fully exploits the wonderful characteristics of silicone rubber. Through clever handling of the geometry and thicknesses of this material, the push-fit lid transforms between a cover and a pouring spout.

“It is very difficult to make non-drip containers in ceramics and glass but the Sagaform Flip Carafe works brilliantly. The thin sharp edge of the pouring spout cuts off the flow of liquid very cleanly; it is impossible to get any liquid to run down the outside of the carafe.

“An additional feature of the lid design is that by a finger push in the right place at the back, the cover pops up, so avoiding touching the end of the spout over which the liquid flows.

“The Flip Top Carafe is an all year round product. It will fit neatly in the fridge door and always be ready with your chilled water. In the summer your fruit juices and fruit flavoured water are for you and not the wasps.”

Robin studied ceramics at the Central School of Art and Design and the Royal College of Art, graduating with a master’s degree in 1976 before joining the design partnership Queensberry Hunt where he later became a senior partner in what became Queensberry Hunt Levien.

In 1999 he set up his practice Studio Levien with his partner Patricia Stainton to design a wide variety of products for international markets. He was on the council of the Royal College of Art between 2000 and 2012 and was made a Senior Fellow in 2013.

Robin was given a Lifetime Achievement Award by ‘Homes & Gardens’ magazine in 2008 and has several pieces of his work in the permanent collection of the Victoria & Albert Museum in London. He is a visiting professor at Central St Martins and an Honorary Doctor at Staffordshire University.

Sagaform, which offers more than 300 tabletop and gift products, is distributed in the UK by Forma House.