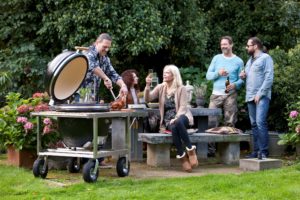 Retailers and manufacturers are predicting Brits may ditch the traditional Easter roast for a barbecue dish because of the mild weather.

German barbecue brand Monolith reports a rush in orders in the last few weeks, with demand rising for purchases much earlier than usual.

Monolith UK director Paul Yates said: “The last month has seen us swamped with calls from retailers looking to stock barbecues and accessories for a boom in sales right before Easter.

“The spell of good weather and the forecast for a mild Easter break has encouraged shoppers to start thinking outdoor dining.”

Barbecuing and ‘at-home eating and entertaining’ is the UK’s number one summer home leisure activity, with two in three households now owning a barbecue grill, according to statistics from National BBQ Week.

In 2015 the UK was Europe’s leading barbecue nation, hosting over 130 million barbecues and beating the Germans into second place for the fifth time.

Paul commented: “Barbecuing is hugely popular in the UK but it has changed. Forget the image of a man in an apron burning some burgers on a grill. Charcoal barbecues have evolved in technology and many of the leading ranges out there now offer oven barbecues, where you can slow cook, bake, smoke and roast.”

He cites the example of Monolith’s barbecues which, he says, “combine a stone oven with a traditional grill, meaning you can do everything from bake pizzas, to grill steaks, to your Sunday roast.

“Because these barbecues use a design which ensures low air circulation and accurate temperature control, it prevents food from drying out and losing flavour, giving far better results than your kitchen cooker.

“This type of barbecue is now the chosen favourite in Europe and the USA, who define barbecuing more as charcoal oven cooking, whatever the time of year.

“If you go to the likes of Kentucky, you’ll see them barbecuing in the middle of the snow! Germany has also seen a huge boost in out of season barbecuing, and more Germans investing in outdoor kitchens to use all year round.”

He added: “So, the UK may have changeable weather, but with oven barbecues it really doesn’t make any difference. I did our last two Christmas dinners on a Monolith. So whatever the Easter weather, we should all get out there and embrace outdoor cooking!”

Monolith barbecues come with a 10-year warranty and are made from heat-resistant ceramic and high grade stainless steel. They are available in different sizes, from the Monolith Junior which retails at £360 to Monolith Classic with a retail price of £895 and the extra-large Monolith Le Chef, which retails at £1,495.