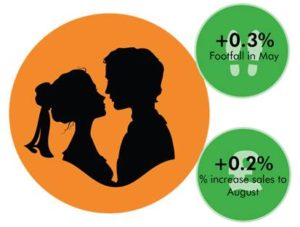 Latest data from the retail specialist Springboard reveals that the royal wedding of Prince Harry and Meghan Markle on Saturday (May 19) is set to boost retail sales across the UK by an estimated £195.5 million (+0.2% uplift) by the end of August with footfall set to increase by an average of +0.3% over the next four months.

In May alone, UK retailers are set to receive a much needed boost with an estimated £93.1 million to be spent across UK high streets, shopping centres and out of town retail parks. ‘Royal Wedding Fever’ will see a further £102.4 million spent over the summer months of June, July and August.

Diane Wehrle, insights director at Springboard said: “National celebrations have traditionally had a positive impact on both footfall and spending behaviour.

“Over the period of the royal wedding of the Duke and Duchess of Cambridge [which took place on April 29 2011], footfall increased by 5% in the week of the wedding, and then by an average of +0.9% over the three months following the wedding, as shoppers’ spirits lifted and their purse strings loosened.

“Whilst we are anticipating a rise in sales, we are forecasting that this increase will be around a quarter of that forecast for the previous royal wedding – in part as a result of the poorer trading conditions that we are currently experiencing.

“However, we are still anticipating that spending on food and drink will rise by £33.2 million, whilst non-food (which includes fashion) will reach £48.9 million as a result of the much talked about ‘Meghan Effect’.

“With a global spotlight on the UK, direct tourist spend is set to rise by £48.9 million over the coming months – and over £41.1 million is set to be spent on wedding linked merchandise.”