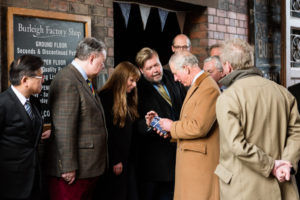 HRH The Prince of Wales visited Middleport Pottery – the home of Burleigh – on Tuesday (November 28) as part of a royal tour of Stoke-on-Trent.

Established in 1851, Burleigh is the only pottery in the world to decorate using tissue transfer printing from hand-engraved copper plates. It is world famous for its blue and white ceramics, which are hand-made using traditional techniques.

The Prince is the founding patron of the United Kingdom Historic Buildings Preservation Trust (UKHBPT), which acquired the Middleport Pottery in Burslem in 2011.

Since then UKHBPT has invested funds to regenerate and revitalise the site. The Pottery is now an award-winning visitor destination – and the restoration has meant that Burleigh has remained on-site, saving local jobs and craftsmanship.

The Pottery’s unused buildings have been developed to provide accommodation for workshops, enterprise space, craft and community areas, a cafe, a gallery and a heritage visitor centre.

During the royal visit, Prince Charles was given a tour of the Pottery’s newest attractions and facilities. He formally opened Clay College Stoke, located in one of the Pottery’s buildings, which has been training aspiring potters in traditional ceramic techniques since September.

He also met artisan tenants of the workshops, and unveiled three plaques.

The first plaque commemorates the opening of the Pottery’s Bath House: underground washrooms that have been restored and are now open to the public to visit for the first time. The bathroom facilities were originally installed over 130 years ago by Burleigh’s philanthropic owners, Mr Burgess and Mr Leigh, for workers to use.

The second plaque celebrates the restoration of the Victorian steam engine at Middleport Pottery. Visitors are now be able to observe the intricate workings of the machine that once powered the the entire production of the Pottery.

The third plaque marks the opening of ‘The Dane’: one of Britain’s last remaining wooden built narrowboats, which spent its working life bringing clay from Cornwall to the Potteries. Built in 1946 at the Mersey Weaver and Ship Canal Carrying Company next door to the Pottery, the 70ft barge has been renovated and is now permanently moored at Middleport for visitors to board.

The Prince met many members of Burleigh staff too, and was presented with a Calico jug by Alison Howell, a design graduate who has worked with Burleigh to protect its unique tissue decorating techniques. The jug is a trial piece, produced using a freshly engraved roller. The Calico design celebrates its 50th anniversary in spring 2018.

The picture shows The Prince of Wales accepting a unique Burleigh Calico Jug.

Share
Previous Ready for your close-up?
Next Sainsbury’s joins forces with Debrett’s