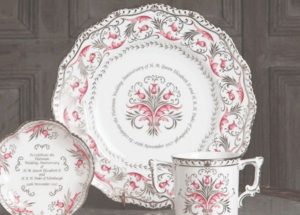 The Queen and Duke of Edinburgh celebrate the 70th anniversary of their marriage this year.

The range comprises four bone china pieces featuring an adaptation of the Princess pattern originally designed in 1947 by Royal Crown Derby, and presented to the royal couple, when they married on November 20 at Westminster Abbey.

Delicate script adds a celebratory touch, with a message commemorating the anniversary in platinum. This is a reference to the traditional precious metal given to couples on their 70th wedding anniversary.