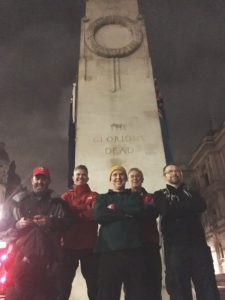 Roger Morgan-Grenville, director of housewares distributor Dexam, is walking 50 miles to raise funds for the charity Walking With The Wounded.

He said: “At 10pm on Friday December 1, a few of us (38 at the last count, including three or four from the housewares industry), will be leaving the Cenotaph war memorial in central London and walking to the town of Petworth in West Sussex overnight and the next day – more or less non-stop – until we get there at about teatime on Saturday: a distance of exactly 50 miles.

“Whilst it’s not exactly Everest, it is mainly middle-aged men and women doing something that their bodies really aren’t expecting (or likely to be welcoming) in the dark and probable rain. And it is further than any of us have ever walked before.

“Why are we doing it? Because Christmas is great if you have a home, a family, a job. If you feel you have a place in life. But Christmas is lousy for some. Like vulnerable ex-servicemen and women who, through no fault of their own, risk being out of a job and in a sharp decline.

“Our ‘Long Walk Home’ is our contribution to Walking with the Wounded’s campaign to fight for a better future for these people. Between us, our group is planning to raise at least £25000 for Walking with the Wounded’s Christmas Appeal: a major project aimed at stopping vulnerable ex-servicemen and women from falling through the cracks in the system and ending up on the street.

“The project uses the fact that these men and women are, at heart, disciplined and capable people, and will react well to the training that can help them back into work, and safety. Results over the last couple of years have produced an 86% success rate after six months.

“The £25,000 is the seed capital needed to open their next Support Centre. My personal Justgiving link is below, and I would be very grateful indeed for any support that fellow Housewares friends would like to give. If it is a cause you believe in, and wish to contribute, please do so here. I would be really grateful.”