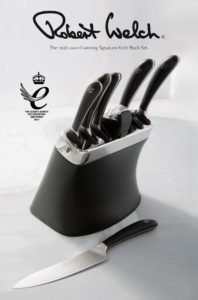 Housewares company Robert Welch Designs has joined an elite number of businesses in winning a Queen’s Award for Enterprise in Innovation.

Robert Welch Designs’ honour is in recognition of the integrated sharpening and storage capabilities incorporated into its Signature Knife Block Set, which has resulted in the Signature range making ‘a significant and increasing contribution to the company’s continued growth’.

The Queen’s Awards for Enterprise are for outstanding achievement by UK businesses in the categories of: innovation, international trade, sustainable development and promoting opportunity through social mobility.

The innovation should be in one of the following categories: invention, design or production of goods, performance of services, marketing and distribution or after-sale support of goods or services.

The winners were officially announced today (Friday April 21) in the ‘London Gazette’ (one of the official journals of record of the British government) and on GOV.UK. They receive a Grant of Appointment, a presentational item and the Queen’s Awards emblem. The awards are valid for five years.

Representatives from Robert Welch Designs have been invited to attend a royal reception at Buckingham Palace, hosted by Her Majesty The Queen, in July. They will also be presented the award at their company by one of The Queen’s representatives, a Lord-Lieutenant.

The firm will also able to fly The Queen’s Award flag at its Cotswolds headquarters, use the emblem on marketing materials, and will be given a Grant of Appointment and a commemorative crystal bowl

Last year Robert Welch Designs received the Queen’s Award for Enterprise in International Trade, after increasing year-on-year overseas sales by 29% in the preceding five years. The company says its sales of the Signature range have “never been so buoyant”.

Design director Paul deBretton Gordon commented: “As a brand we had been predominantly known for our cutlery products. So developing a knife storage solution, together with integrated sharpening options, presented a substantial challenge to the business.

“Equally, we recognised a significant gap in the market versus traditional wooden knife blocks. This is what the Innovation Award really stands for. It underscores the whole DNA of the company and just how much care is taken in designing and developing products that are not just aesthetically appealing, but can also provide greatly improved functionality.”

“The award especially recognises the hugely talented team here at Robert Welch – and to be part of an elite group of Queen’s Award winners for a second year running is a real honour, and brings a sense of pride to everyone involved.”

Founded in 1955 by Robert Welch, Robert Welch Designs is a family-run business where Robert, having trained at the Royal College of Art, set up his design studio with just his drawing board and camp bed in a disused Silk Mill in Chipping Campden – where the company is still based.

Robert passed away in 2000 and over the last two decades his children Rupert and Alice have expanded the business from its modest beginnings to supplying customers and retailers all over the world.

In 2005 they believed they had identified a gap in the market for premium quality kitchen knives which deliver performance and longevity for the home or professional kitchen.

Over the next three years Paul, along with Rupert, worked with professional chefs to develop a range that would provide “superior sharpness along with optimum cutting action and comfort”. A total of 286 prototypes later, the Signature knife range launched in 2007: a series of precision tools, designed, hand-honed and sharpened by master craftsmen.

In 2008, the design for the award-winning Signature Knife Block Set (RRP £325) was conceived: a storage block with sharpener and integrated magnets. Neodymium magnets protect the knives’ cutting edge by suspending them in six individual slots. A replaceable integrated sharpener encourages regular knife sharpening.

Rupert said: “While it may have taken three years to perfect the design and ensure every knife is perfectly balanced, it’s been worth every second.

“Receiving Royal approval for the innovation behind our Signature Knife Block Set, and exceeding 1 million sales of the Signature range worldwide, is validation that we achieved everything we set out to do.”

Alice added: “Last year we were privileged to receive a visit from HRH the Princess Royal who presented us with our Queen’s Award for Enterprise for International Trade. This allowed us to invite suppliers and retailers from all around the world for a special celebration here in Chipping Campden. As a result, we feel our relationships with these partners have never been stronger.”

In the year 2015 Robert Welch Designs turned over £13.75 million. Since then sales have increased by over 5% to £14.5 million in 2016. As the latest financial year comes to a close, the company is predicted to announce further sales growth, year on year of around 7.5%.