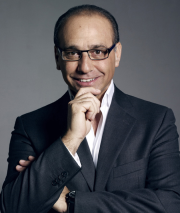 He added Robert Dyas to his retail portfolio in 2012. The Group now includes almost 350 stores nationwide, with over 4000 employees serving over 28 million customers a year.

Theo said: “As was the case for most of last year, the Christmas trading period was ‘hard work’ for many retailers. In all my years I’ve never seen it so hard and unforgiving, where the shopper will punish you if you take your eye off the ball. I’m therefore very pleased that we were able to deliver growth as a Group.

“We found that footfall in our stores operating in key regional shopping centres was weaker than expected. The lack of footfall did lead to a very competitive market and I’m pleased that our margins were only fractionally below last year. Inventory was purchased and managed tightly, given our outlook on the market at the start of the year.

“It has now become clear that governmental thinking around changes to business legislation, policy and taxation of revenues especially in the UK, is lagging well behind the development of the retail sector globally, which is creating more uncertainty and risk for retailers and thus the economy.

“With very little interest shown by Government in this key economic pillar, it really does feel like retail – as we know it – is creeping closer and closer towards the precipice. We continue to watch this space carefully, but are not confident of improvements and see it as the biggest risk to our High Street and physical shops. Online is now the key to most retailers’ success or otherwise. Thus I’m pleased that our continued investment in this channel was rewarded with further growth.

“Black Friday was once again eagerly awaited by our customers and is now an established purchasing window in their psyche, resulting in many records being achieved that week, as customers who had postponed purchases in anticipation of discounts opened their purses and wallets. I was particularly pleased that we were able to deliver this massive spike in sales, whilst meeting the expectations of our customers.

“It is expected that the headwinds for retailers will continue, given the economic and political environment we operate in. Despite this there are, and always have been, opportunities for retailers that remain relevant, and we intend to continue to work hard to achieve continued success. We are cautious, but our investment in the Group is increasing, particularly to support the areas where we see future growth.”

Theo added that following investment, Robert Dyas “successfully grew its online proposition with true multi-channel capability”, seeing 50% of orders collected from stores. The business also moved central functions from Leatherhead to Wimbledon to join the other companies in the Group.