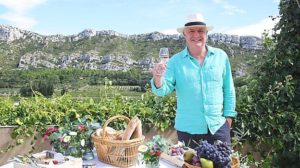 In ‘Rick Stein’s Secret France’, the celebrity chef and restaurateur will roam the length and breadth of the country in his car, leaving the main routes and tourist hotspots behind to embark on a very personal road trip.

Across six one hour episodes, he will travel along the Normandy coastline and the Bay of Somme to Provence, Champagne and Alsace, and the lesser-known regions of Jura, Auvergne, Perigord and southern Roussillon.

Rick will eat at both traditional and innovative restaurants, visit markets and encounter local chefs, farmers, artisans, vineyard owners and expats – all of whom will reveal insights into the country’s cuisine.

Rick said: “My friends tell me that France is no longer the place for good food. They say the towns and villages that have been touched by tourism are now all the same. But I guess I’m a bit of a romantic and I’d like to prove them wrong.

“So I’m going to get off the beaten track and take to the backroads to find a hopefully less-discovered France that still cherishes the best of its past, and is creating modern exciting dishes that are still unmistakably French. It’s a journey that I know a lot of my viewers would like to take – and I hope we won’t be disappointed.”

BBC Two head of commissioning, popular factual and factual entertainment David Brindley commented: “We couldn’t be more delighted to have Rick back on BBC Two. What better guide to take us through France and uncover its hidden gems? I can’t wait to be led through the country, the food and its people in Rick’s own unmistakably warm, informative and enthusiastic way.”