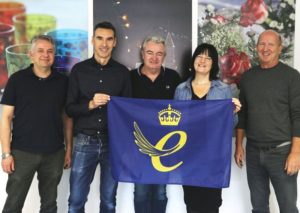 Rex London has received the Queen’s Award for International Trade, following six years of continuous growth in overseas sales. The accolade is awarded for growth and commercial success in international trade.

The company began in 1981 as a market stall in London’s Portobello market and is now a major international wholesaler of homeware and giftware, offering a range of more than 2,500 products to retailers worldwide. Its export sales have risen 250% since 2012.

Sales director Nigel Biggs said: “We take a global outlook when it comes to trade. Our websites are fully translated into French and German, we attend multiple international trade shows each year, and we have recently established a physical presence in the Netherlands and Belgium, from which we sell direct to local retailers.”

With plans to expand in Europe and distribution arrangements being set up in Canada, Australia, New Zealand and Japan, Rex London now exports to over 70 countries.

The firm will celebrate its award during a royal reception for Queen’s Awards winners in the summer, and will use the esteemed emblem for the next five years.