Retail footfall ‘sticks to the tramlines’ in August

12th September 2017 News Comments Off on Retail footfall ‘sticks to the tramlines’ in August 1,923 Views 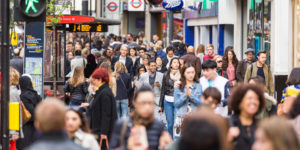 Retail footfall levels fell back in August from a summer peak in July, according to retail consultancy Ipsos Retail Performance.

This data is derived from the number of individual shoppers entering over 4,000 non-food retail stores across the UK.

Footfall in every region dropped compared with July, with the south-east and London suffering the worst, falling back -10.3%. This was largely due to the peak summer exodus as people headed away on holiday. The south-west and Wales performed best. Both regions benefitted from an increase in holidaymakers, and only fell back -1.8% compared with July.

Ipsos director of retail intelligence Dr Tim Denison said: “Footfall is currently running in tramlines that are fixed between 3 and 4% lower than last year, providing a period of relative stability that has been greater than expected given the political and economic climes.

“Inflation will have a big part to play, and while it’s expected that general inflation will peak soon and release financial pressures on households, the benefit of this to retailers could be cancelled out by possible price inflation in non-food retailing – creating a zero sum game in terms of demand.”

Ipsos also reported how high street footfall trends have changed in the past decade, since the start of the credit crunch. Some 27% fewer shopping trips are made to stores than at the start of the crash, while online sales have ballooned from 2% to 20%. High street retailers in Scotland and Northern Ireland have suffered the most in the past 10 years, with footfall dropping -32%.

Dr Denison commented: “In the month that marks the 10th anniversary of the credit crunch, it’s ironic that we find ourselves once again in the midst of a credit boom. The retail scene has changed dramatically – not least with the shift to ‘anywhere, anyhow, anytime’ shopping.

He added: “The outlook is now better than it was at the start of 2017. The ongoing record low bank rates and access to loans has softened the impact of fragile disposable incomes. For the time being, footfall and retail sales appear settled, although the challenge will come when the economy looks strong enough for the base rate to rise.”