Record number of visitors for Ambiente

19th February 2018 News Comments Off on Record number of visitors for Ambiente 2,072 Views 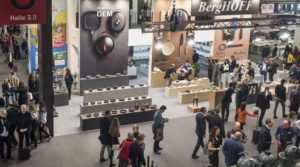 A record number of visitors travelled to German trade show Ambiente, making the fair the most international ever.

In total, 134,600 buyers from 168 countries visited Frankfurt am Main to attend the five-day exhibition, which ended on February 13.

Organise Messe Frankfurt said: ‘As expected, there were fewer German visitors in Frankfurt. This was partly due to changes in the German retail landscape, and partly because the event coincided with Carnival as well as school holidays in Germany’s southern states.”

The attendees checked out the wares of 4,441 exhibitors from 89 countries, spread over 308,000sq m (gross) of space. A total of 81% of all exhibitors came from outside Germany, making Ambiente ‘the most international consumer goods trade fair of all time’ according to Messe Frankfurt.

Exhibitor Birgit Dubberke, marketing director of German exhibitor BHS Tabletop, commented: “We keep being impressed by the internationalism of Ambiente – not just in terms of exhibitors, but also visitors. It’s the meeting point of the industry; it’s a place for making valuable contacts with countries that we’d normally never get to.

Michael Rossmann, managing director of UK exhibitor PAD Home, confirmed this view. He said: “When it comes to internationalism, Ambiente was in an even better position this year. Our stand was visited by an unusual number of Italians, as well as Argentinians and other South Americans, which was quite new to us.”

Maren Lehmann, director of internal sales at German porcelain company Staatliche Porzellan-Manufaktur Meissen, added: “Ambiente 2018 went very well for us. We reached our targets, so we’re pleased with the results. The trade fair provided us with an excellent platform. And the organisation was first class, too.”

Ambiente 2019 will be held from February 8 to February 12 at Messe Frankfurt.