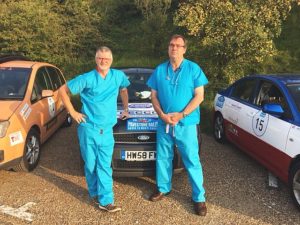 Industry charity the Rainy Day Trust is set to receive over £77,000 in donations from a fund-raising initiative held earlier this month.

A total of 38 teams from across the home improvement sector took part in the four-day Pavestone Rally from September 7, travelling 1,300 miles across four countries, from Dover to Nice.

The rally was organised and massively supported by garden landscape products company Pavestone UK, and the proceeds will be split between the Rainy Day Trust and another charity, Teenage Cancer Trust.

Each team was set a target of raising £1,500 for the charities, with a trophy awarded to the team that raised the most. Three teams raised over £10,000 each and while funds are still coming in, the final figure is looking to top £155,000 to share between the two charities.

Rainy Day Trust ceo Bryan Clover took part in the rally with a fellow charity professional, Justin. He commented that the event once again demonstrated what a “fantastic bunch of people” the home improvement industry is.

He added: “Along with the chairman and board of trustees at the Rainy Day Trust, I want to publicly thank Aaron Frogley and Pavestone UK for the immense amount of time, energy and hard work that they put into the rally. The money raised will be invaluable in helping people from our industry who are struggling.

The final stretch of the rally was a 400-mile drive to Nice on September 10 for the awards dinner. Aaron Frogley from Pavestone presented the winner’s trophy to the BMF/First Event team, with Chandlers Building Supplies in second place.

The best fundraising team trophy went to the NBG Ninjas who raised over £17,000. Second place went to Thomas Dudley, with third place to Lawsons Building Supplies.

You can read more about the Pavestone Rally at https://www.rainydaytrust.org.uk/support-us/events/

To make a donation, visit http://uk.virginmoneygiving.com/team/RainyDayTrustPavestone or text PAVE04 £5 to 70070
The Rainy Day Trust operates across three sectors (builders merchants, DIY & hardware and housewares & tabletop) which have a combined turnover of more than £50 billion and employ close to 500,000 people.

It is the only charity which exists solely to help people who have worked in these industries, including cookshops, hardware stores, DIY shops, builders merchants, garden centres, and the manufacturers, distributors and retailers in the UK who supply them. It offers a range of services to retail and supplier employees, from a regular cash payment to white goods and even house repairs.